Today is International Women’s Day. For over 100 years, March 8 has marked this global celebration of the social, economic, cultural and political achievements of women. Equally so, the day serves as a reminder to act.

Movements like #MeToo and #TimesUp have strongly illuminated the need for greater gender parity in our homes, workplaces and communities. The theme of International Women’s Day 2018, #PressforProgress, urges continued action toward gender inclusivity.

“I will cure cancer.” The resolve on display in Microsoft’s “Make What’s Next” ad is palpable.

Four adolescent girls see their dreams come to life in virtual reality. Then a message appears: “Odds are you won’t solve any of these problems. Only 6.7% of women graduate with STEM degrees.” Disappointment quickly transforms into dedication. These girls WILL be the people who find solutions and change the world.

The ad is just the tip of the iceberg for Microsoft. Their Make What’s Next campaign encourages girls to pursue their love of science via a career in STEM. The tech giant sponsors a live event series featuring influential women in STEM, offers online training to students and teachers, hosts youth camps and provides advocacy opportunities. 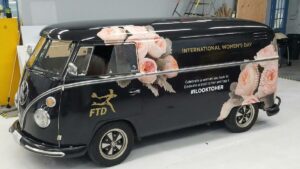 FTD really rose to the occasion last International Women’s Day. The floral delivery company surprised women with bouquets at a dozen locations in Chicagoland. Five offices belonging to companies that champion women at work were included.

With a little help from their friends at experimental agency, OutCold, FTD brand ambassadors drove a branded vintage Volkswagen to make the special deliveries.

The sculpture appeared overnight and took the world by storm. Fearless Girl stands proudly across from Wall Street’s Charging Bull. The statue silently issued a message heard across the globe: women in leadership make a difference.

Fearless Girl was developed by State Street Global Advisors and McCann New York, and sculpted by Kristen Visbal. Celebrating the power of women in leadership, the bronze made its debut on International Women’s Day 2017 and immediately made headlines. In addition to garnering millions of dollars of free publicity, Fearless Girl has become a symbol for aspiring women of all ages.

This Lego set skyrocketed to the top of Amazon’s best-selling toy in less than 24 hours. Depicting the “Women of NASA,” the set is the latest installment in the iconic brand’s effort to feature more female characters. The heroines depicted include Astronaut Mae Jemison, the first African-American woman in space; Nancy Grace Roman, a former chief astronomer at NASA; and Katherine Johnson, the mathematician and space scientist featured in the 2016 film Hidden Figures.

In January 2015, Lean Cuisine changed the conversation around a woman’s weight. Instead of stepping on the scale, women were asked to weigh what really matters.

Their responses were put on display in Grand Central Station. More than 250 scales were hand-painted with stirring statements like “Caring for over 200 homeless children,” and “Raising 2 beautiful strong intelligent daughters as a single mom.”

#WeighThis took off social media. Submissions using the hashtag flooded in from around the world. Lean Cuisine went so far as to create a browser extension that filtered out the word “diet” across the internet.

Athleta and GirlVentures: Power of She

A collaboration between Athleta and GirlVentures delivers hope for the future in droves. The lifestyle brand and Bay Area-nonprofit led a group adolescent girls on multi-day adventure in Joshua Tree National Park to build community, self-reliance and self-esteem.

The Athleta-clad teens journey through GirlVenture’s outdoor programming and overcome many obstacles in the process. The greatest one of those? Self-doubt.

In 2017, the H&M Foundation published an awe-inspiring list of 500 female entrepreneurs from around the world. The Foundation 500, a counter to the Fortune 500, honored and shared the stories of business women of color from rural or developing areas. In addition to running successful companies, the women improve their communities through education, employment and the advancement of equal opportunity.

The Foundation followed up the list with a $5.6 million investment to provide job skills training and business capital to more female entrepreneurs.

Attendees who can get their hands on a ticket make their way through 29 literal rooms. Each hosts a unique experiential activity. Shoe brand Aldo sponsored a room in which guests of all shapes and sizes worked the “Love Walk” runway. In “The Future is Female” room, punching bags hung from the ceiling, adorned in hand-painted messages of empowerment. Visitors were given boxing gloves to throw blows that triggered a symphony of sound.

The 2017 theme “Turn it into Art,” aimed to “explore the power of creativity to transform, to spark new ideas and to heal.” It was hyper-relevant, hyper-cool, and 100 percent on brand for the digital publisher.

Previous: 7 Things the Olympics Teach Us About Hosting Live Events

Next: INFOGRAPHIC: 8 Critical Considerations for Crafting a Great Brand Experience